Connect with others who understand.

Excess Sweating Can Be a Drenching, Wrenching Burden 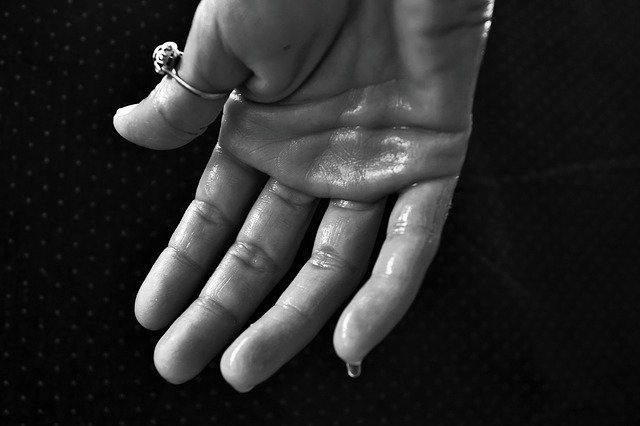 By Amy Norton, HealthDay Reporter WEDNESDAY, Dec. 7, 2016 (HealthDay News) -- People with hyperhidrosis -- an excessive sweating condition -- also seem to have higher-than-average rates of anxiety and depression, a new study suggests.Roughly 21 percent and 27 percent of people with hyperhidrosis screened positive for anxiety or depression, respectively. That compared with 7.5 percent and just under 10 percent of other patients, the study revealed.The findings do not prove that hyperhidrosis caused those mental health issues. In some cases, excessive sweating may be part of an anxiety disorder, for example."It's not clear if this is cause-and-effect," said Dr. Dee Glaser, a professor of dermatology at Saint Louis University School of Medicine.So the findings don't necessarily imply that better control of hyperhidrosis would ease people's depression and anxiety, according to Glaser, who wasn't involved in the study."But," she said, "dermatologists should be aware of the higher prevalence of anxiety and depression in these patients."And if necessary, Glaser added, they can refer patients to a mental health professional.Hyperhidrosis is a medical condition that causes people to sweat excessively and unpredictably -- including when they're at rest or in cool conditions. It's estimated that about 3 percent of Americans have hyperhidrosis, according to the International Hyperhidrosis Society.There are treatments, such as strong antiperspirants, Botox injections for underarm sweating, and electrical stimulation to dial down sweat-gland activity in the hands and feet.Still, it's common for people with hyperhidrosis to feel self-conscious and avoid social activities -- or even things as mundane as raising a hand in class, Glaser said."For people who don't have hyperhidrosis, it's easy to think, 'Oh, it's just sweating,'" Glaser noted. "The impact it can have on quality of life has always been underestimated."For the new study, Dr. Youwen Zhou and colleagues wanted to get a clearer idea of whether overt depression and anxiety disorders are especially common among people with hyperhidrosis.The researchers had just over 2,000 patients at two dermatology clinics -- one in Canada and one in China -- answer standard questionnaires that screen for depression and generalized anxiety disorder.It turned out that both conditions were more common among hyperhidrosis patients, and the risk was higher when their sweating problems were more severe, the findings showed."This study suggests that hyperhidrosis is tightly linked to depression and anxiety," said Zhou, who directs the Vancouver Hyperhidrosis Clinic at the University of British Columbia, in Vancouver, Canada.But like Glaser, he said the findings do not necessarily mean that hyperhidrosis is the cause.In fact, Zhou said, it may be "more likely" that some other underlying factors contribute to both hyperhidrosis and depression and anxiety. "More research is needed to uncover this mechanism," he said.For now, both Zhou and Glaser suggested that hyperhidrosis patients talk to their doctors about any mental health symptoms."Don't feel like you have to just live with it," Glaser said.Please note: This article was published more than one year ago. The facts and conclusions presented may have since changed and may no longer be accurate.SOURCES: Youwen Zhou, M.D., Ph.D., director, Vancouver Hyperhidrosis Clinic, University of British Columbia, Vancouver, B.C., Canada; Dee Glaser, M.D., professor, dermatology, Saint Louis University School of Medicine, St. Louis; December 2016, Journal of the American Academy of DermatologyCopyright © 2016

Here are some questions and conversations from MyHyperhidrosisTeam:

• "Mine starts on my head and can actually feel it spreading out within my hair (like a puddle eh water getting bigger). It's a total nightmare and really lowers any self-confidence!!"

• Help with facial and scalp sweating. I’m really desperate for advice on how to manage this curse. It’s getting so bad I don’t want to leave my home because I’m so embarrassed.

• "Life can be lonely with this because if you're like me I'm afraid to get close to anyone because of my condition and didn't know if anyone out there felt the same."

Have you experienced depression or anxiety as a result of living with hyperhidrosis? Share in the comments below or directly on MyHyperhidrosisTeam.

Thousands of members of MyHyperhidrosisTeam connect with one another and read each other's...

Thousands of members of MyHyperhidrosisTeam connect with one another and read each other's...
read article >

The excessive sweating of hyperhidrosis can be even worse in hot weather. Sweat is usually most...

The excessive sweating of hyperhidrosis can be even worse in hot weather. Sweat is usually most...
read article >

Those of us living with pre-existing health conditions such as hyperhidrosis have likely felt...

Those of us living with pre-existing health conditions such as hyperhidrosis have likely felt...
read article >

How Is Hyperhidrosis Diagnosed?Many primary care physicians are unfamiliar with hyperhidrosis....

How Is Hyperhidrosis Diagnosed?Many primary care physicians are unfamiliar with hyperhidrosis....
read article >

There are two types of hyperhidrosis. In primary focal hyperhidrosis, there is no underlying...
read article >

Hyperhidrosis is a medical condition that causes excessive sweating. Everyone sweats – sweating...

Eat healthier. Exercise more. Learn a new skill. Pay off a credit card. Many of us have made...

Eat healthier. Exercise more. Learn a new skill. Pay off a credit card. Many of us have made...
read article >

This time of the year can be overwhelming with expectations around the holidays, and living with...

This time of the year can be overwhelming with expectations around the holidays, and living with...
read article >

Two Ways to Get Started with MyHyperhidrosisTeam

Connect with others who are living with hyperhidrosis. Get members only access to emotional support, advice, treatment insights, and more.

Get the latest articles about hyperhidrosis sent to your inbox.

Thank you for signing up.

close
ABOUT HYPERHIDROSIS CAUSES DIAGNOSIS SYMPTOMS TREATMENTS RESOURCES
New to MyHyperhidrosisTeam? Learn More
Quick Links
Q+A Treatments A-Z Resources Are you a provider? Crisis
About Us
What is MyHyperhidrosisTeam? Partner with us Terms of service Press/News Privacy policy Cookie policy
Help With This Site
Getting started FAQ Community guidelines Contact us

Get the MyHyperhidrosisTeam mobile app

© 2021 MyHealthTeams. All rights reserved.
MyHyperhidrosisTeam is not a medical referral site and does not recommend or endorse any particular Provider or medical treatment.
No information on MyHyperhidrosisTeam should be construed as medical and/or health advice.